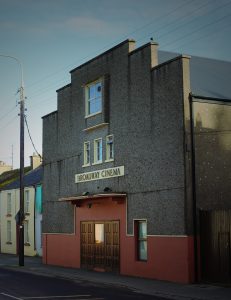 Dunmanway in the 1940s was a grey place.   A long grey Main Street, two Churches , a Square, a Parish Hall, shops.   And then came the Cinema!   Broadway Cinema - even the very name had an exotic ring to it.  We knew nothing about Broadway, but we did know that it was a far away magical place, where anything could happen and where life was a million miles  from anything we had ever experienced.

Our Broadway Cinema was at the western edge of the town, an imposing enough building, with enticing posters at its entrance promising us glimpses into a world beyond our imagining.   The Cinema was built in the 1930s, and was run by Barney and Sabina Deane, who ran it like a well ordered ship. 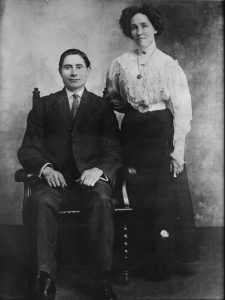 My fond memories were of the Sunday matinees.   For sixpence, or less, my brother and I would set out to enter this fantasy world, of cowboys and Indians, of newsreels and detectives, of wars in far off places, of romances and comedies.  All the films seemed to be for general consumption - I don’t remember any dubious ones.   But then again this was the era of ferocious censorship, so it would have been unlikely if any of a doubtful nature would have slipped in…

First Mass, then ‘dinner’, and then, provided our homework was finished, we were free to set out on our cinematic adventure.   Gene Autry, Hopalong Cassidy, Roy Rogers and his beautiful horse - oh how I longed to have a horse like Trigger.   These cowboy films fired my imagination, and when THE END came up on the screen I would leave the cinema and gallop my imaginary horse all the way back to our house, leaving my brother to follow at an embarrassed distance! 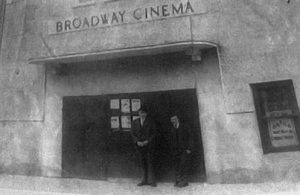 Barney Deane and his son, Bernie outside the Broadway Cinema
(courtesy of Dunmanway Historical Society)

Mrs Deane would countenance no bad behaviour or rowdy carry on at these matinees.   It wasn’t always the most orderly audience though.   Seats being swapped, sweet papers being tossed about, heavy shoes stomping out to the toilets.   But as soon as we heard the swish swish of her fur-lined bootees approaching, and saw the darting light of her torch, then silence would prevail.   Any child caught on the hop would be put out against the wall, to stand there until she made her exit.

St. Stephen’s Day was the most important cinema-going day of the year for us children. Up with the dawn to blacken our faces, to disguise ourselves with any old coats and caps which we could find, and to cover a branch of a holly bush with coloured rags.   Then out to bang on all the neighbours’ doors and sing THE WRAN THE WRAN THE KING OF ALL BIRDS ON STEPHEN’S DAY HE WAS CAUGHT IN THE FURZE etc. etc.

Doors would open swiftly to get rid of us, and money thrown into our baskets.   When we had collected enough, we would head home to change and eat, and then make for Auntie Bessie’s sweet shop, where we would blow the lot, (keeping back enough of course  for the cinema entrance), on Dolly Mixtures, Toffees, Liquorice Allsorts and lollipops.   Then to the cinema and the matinee, where poor Mrs. Deane had her work cut out keeping us from jumping off the walls.   I have no idea what was ever shown at those Matinees, but I do know that we had great fun, and I even remember being put out against the wall myself at one stage!

Upstairs were the more expensive seats.   These were usually occupied by adults or by courting couples.   As a special treat, and when I was a little bit older, I would accompany my Mum on these Sunday visits, where I would laugh my head off at the antics of the Marx Brothers, and go silent at the soppy tear jerkers, closing my eyes tightly when the kissing started!   My father would never ever join us, so I think I got to be taken merely because Mum couldn’t visit a cinema alone - it was not done in those days, and certainly not in Dunmanway.

Time moved on, and soon I was a Convent Secondary School girl.   I would now frequent the posh balcony seats with my friends, where we would lose ourselves in the magic on the screen, in between keeping a watchful eye on any interesting looking boys sitting nearby.   The nuns were fairly open-minded about our ‘picture going’, and with censorship so tight I don’t suppose they had any reason to worry.   I remember too that they marched the whole class across the town to the cinema, to view The Song of Bernadette. That meant a whole afternoon off school, so maybe that was my favourite film!

I left Dunmanway in 1957, to study and work in Cork City, but my film-going continued.   Now it was the Pavilion, the Savoy, the Academy and the Coliseum which we frequented, sometimes twice or three times a week.  Staying in a succession of dreary digs, going to the pictures was the highlight of the week, where I could escape for a few hours, and dream of better things to come.

Broadway Cinema Dunmanway closed down in 2005, leaving a great void in the cultural lives of the people of the town.  But it was part of our growing up.  It fuelled our imaginations, put magic into our lives and gave us a taste of that great big world out there. I often wonder what inspired Barney and Sabina Deane to take the plunge and open their wonderful place of entertainment in this small corner of West Cork.  They were indeed a very special couple.

Broadway cinema was established in 1930 by local man Barnabas (Barney) Deane and his Galway-born wife, Sabina. The couple had returned from America with ambitions to establish a business in Dunmanway. They set up a variety of small enterprises, including a Handball Alley, before they opened the cinema in 1930. In its early years the venue played host to dances, concerts and even a few boxing tournaments, but within the decade films had become the mainstay. Below, Dunmanway-born author Phil Young remembers excursions to the Broadway in the 1940s and 1950s.