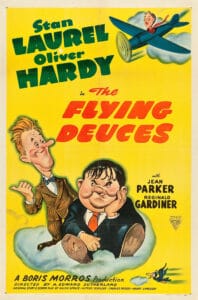 The first flick I remember seeing had Laurel and Hardy in it. I don’t remember the title or the picture house, and I can recall only one scene. Hardy is facing the camera and is having an argument with Stan. His backside is to a river, and his ass is protruding over it. A shark glides by, and its fin – which is the only thing visible - slices through his pants. He turns around in a temper to find out who or what his persecutor was, and there is no evidence. He then continues his argument with Stan, and the same situation arises. Stan can see what is happening, but he doesn’t tell Oliver. I am sure it was a very funny scene because it stayed in my memory, and I would love to know which movie it appeared in. I guess it was the mid-fifties when I saw it, but the film probably originated in the thirties or forties as that was their heyday.

When we were not playing hurling or talking about it, there was only one other subject – and that was going to the pictures, or how we were going to get to the pictures. Saturday afternoon was a must, especially in the winter. The Savoy was number one, but if we could not afford that plush palace, then any of the others would suffice.  The Pav; Capitol, Palace, The Col, The Ritz, The Lee, and the Assems. The latter was my favourite because it was the cheapest, and there was always a double bill. Usually, this was a cowboy flick supported by a British B movie.  A much older friend of mine, now unfortunately deceased, told me of his most memorable experience in the Assems. He used to go on Saturday nights with his pal, circa 1950. In those times there would be a main feature which would have been preceded by a shorter flick known as a “follier upper”.  These pictures were similar to to-day’s soap operas on TV, therefore you had to go each week to find out what was going to happen the following week. This series featured Hop Along Cassidy who was played by my pal’s friend’s favourite actor. He idolised this fellow more than Christy Ring, and at the conclusion of one of these “follier uppers”, Hop Along Cassidy gets shot. It is unclear if he is wounded or dead and on the way home afterwards, my pal’s pal says “I’ll fix that bastard next week”.  Which he did, as the Seanchaí used to say at the end of a story.  The following Saturday night, as soon as the “Baddie” appears, our man produces a gun (a real one) and shoots at the “baddie” on the screen. There is pandemonium, the lights go up, the cops arrive and our boys are arrested. 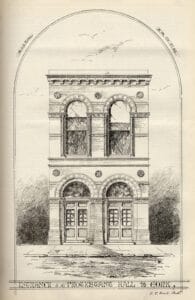 My own personal memory of the Assems was a flick titled The Singer Not the Song starring Dirk Bogarde. It was a western I think, and Bogarde played a priest, who is trying to fend off a woman who has fallen for him. I was about fifteen years old at the time, and there were two younger fellows in front of me who had seen the picture already. One would say to the other – “Your man gets shot here” or something along those lines – and they were spoiling my enjoyment of the story. There was a woman sitting next to me, and she gave me a tap on the arm and said – “Would you ever tell those young lads to shut up”. I was delighted to get the prompt and duly told the lads to shut up. They did, and all was fine for a couple of minutes until the woman tapped me on the arm again and said – “Your man gets shot here”! I dared not tell her shut up, because she was an adult, and I was only a teenager. So, the picture was spoiled twice for me, and I never got to see the end of it, as I had to get back to work for five o’clock. I have often wondered what happened in the end, as I have never seen a re run of it on TV.

One afternoon I was queuing outside the Capitol on the Grand Parade for some big picture, and eventually got in with a couple of minutes to spare. I was standing at the back, peering into the darkness trying to figure out where I would take a seat, when out of nowhere my mother appeared. She said,“What are you doing here when you should be at work?” I got the fright of my life and just turned on my heels and ran out of the place. She had been on a bus that was stopped at the traffic lights across the road at Singer’s Corner, and she spotted me in the queue.  I was caught red handed and left me one and six down the drain! I have no re-collection of explanations when I went home. 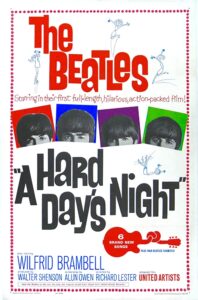 On the seventeenth of August 1964 I started work as a post boy in Haughtons in South Terrace, and the following Friday I collected my first pay packet of two pounds fifteen shillings. That Friday night I got “dolled up” – put on my drainpipes and brown suede pointers– and got the bus into town to go the flicks. It was the Savoy, and it was not any old picture. It was A Hard Day’s Night starring The Beatles. They were number one that week with the title song. I felt like a million dollars walking down the corridor leading to the stalls. I walked up the steps to the entrance and handed my ticket to the ticket collector. I was only gone a few steps towards my seat when your man called me back. He asked me “Can I have your ticket please”? In my excited state I had handed him a ten bob note that was in my right hand, but the ticket was in my left hand. Why he didn’t put the money in his pocket and leave me disappear into the darkness I will never know. I hope he is in heaven. The picture remains a classic and Ringo, who was supposedly the least talented member of the Fab Four, stole the show.

When we were broke, the lads and I would go to town to try and “duck” into the pictures. We were usually successful, but I can not remember the procedure. Inevitably we would have our comeuppance. Our plan was thwarted in the Pav one day, and we ended up in the manager’s office. He turned out to be a nice old sort when he discovered who we really were. He knew my father, and sent us off home telling us to be good boys in future. It was embarrassing for us, but I often wondered how the Old Man felt!  He never mentioned it, I suppose because he was a movie buff himself. I was coming home from the Palace one night on the bus, and he happened to be on it. He asked me where I had been, and I told him. “What picture was it”? he asked me, and I said Kissin’ Cousins with Elvis Presley. He raised his eyes to heaven as if to say “God help us”. He was right there, because the King only made one or two good flicks, and Kissin’ Cousins was probably the worst one he ever made. I asked the auld fellah where he had been, and he said “I went to the Pavilion to see The Old Man and the Sea with Spencer Tracy in one of the triumphs of the screen”.

I became addicted to the Hammer movies that were popular in the late fifties and early sixties. The following is a list of some the ones that I have a record of, and my evaluation.

The following are the flicks I saw during 1963, according to my diary.

In 1965 I got a present of a ticket for the Cork Film Festival, and went to the various shows, morning, noon and night. I discovered what a director was, as that year they had a tribute to Billy Wilder  and all his major pictures were shown. After that education my “Hammer” days were over, and I picked my pictures more carefully.

The poet George Harding was an avid cinemagoer in Cork throughout the 1950s-70s. He frequented all the major city centre venues- from the luxurious Savoy to the more down-at-heel Assembly Rooms. In this piece he remembers the eclectic mix of films he enjoyed, evenings when the action in the venue threatened to overshadow the thrills on screen, and run-ins with figures of authority. He opens this piece with a vivid memory of watching a Laurel and Hardy film, The Flying Deuces, which was initially released in 1939 but was still enjoying revivals in Cork in the 1950s. Mr. Harding shares a memory of a specific scene, involving a shark: in many prints of this film, that scene was cut out. Evidently, the print screened in Cork in the 1950s was one that had retained it. The legendary comedy duo visited the city in 1953 and were received with much excitement and affection; the popularity of their films endured well into the 1960s.

George Harding is a poet from Cork. He has been published in numerous journals, in Ireland and internationally, including The Moth and Southword. His first collection, My Stolen City, was published by Revival Press in 2011 and his second, Last Bus to Pewterhole Cross, was published by the same body in 2015. He is now working on his third collection which will draw on themes that have proven characteristic of his writing to date, namely the environment, ecology, ornithology, politics, and the human experience.